With the Summer Arts Project now over for another couple of years, it is unknown whether it will return after Richard Holroyd’s sad departure later this year. In the meantime, I have decided to remember exactly how Living Faith – Now in Colour happened.

In the preparation for the church’s biennial Summer Arts Project, I found myself on a committee that was very ‘Vicar-of-Dibley’-stylee. But, we had a laugh along the way, and over a couple of short months, drew up the plans for Living Faith – Now in Colour; based on the Diocese of Oxford’s ‘Living Faith for the Future’ “vision”.

On Wednesday evening, the public were invited to an introductory meeting, outlining exactly what was going on throughout the following few days. They were told that they can get involved with the triangular, polystyrene prisms that were to be constructed and decorated; the large, purple, ‘Sustaining the Sacred Centre’ alter cloth, or the brainstorming of a presentation for the ‘Sound and Light Show’ on the Saturday evening. Following a Q&A session, everyone went home, hopefully feeling suitably inspired for the days ahead. 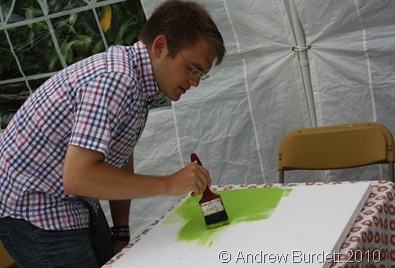 The practical side of the project then kicked off on Thursday morning in the Vicarage Garden, where the first task was to paint the currently-white polystyrene roof-insulation panels, in the colours of the Diocese’s circle: red, yellow, green, and blue.

With them all lying on the ground, I spotted a great photo opportunity. Leaning out of Richard’s bedroom window gave me a great shot of all of the children and adults, spaced between each of – what looked like – massive, coloured railway sleepers. 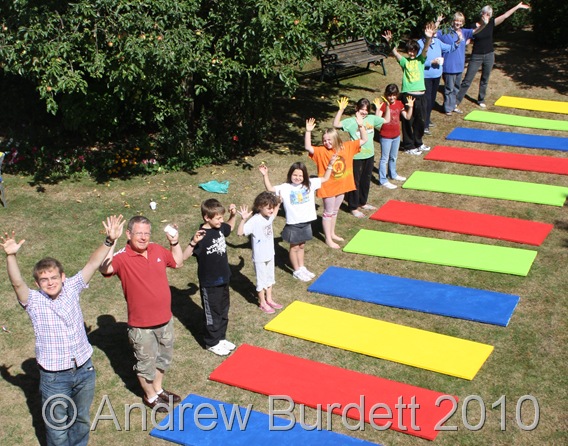 Meanwhile, in the Parish Centre, the ladies of the church had locked themselves away, as they slaved over their needles and thread, literally stitching together the new alter cloth.

Once the panels were dry, they could start being decorated. Because no-one worked on more than one panel, each side of the prisms-to-be were very different to its adjacent board.

Gradually everything was taking shape, so I started on the Son et Lumiere ‘Sound and Light Show’. It was, at least at first, very lonely and hard – coming up with as many ideas for the show as possible on my own. But, once the evening session came, I shared the problem with some more people, and together we came up with the first real plan of the show. 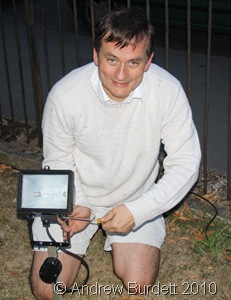 As I stepped outside, a part of the project that Dad was being very involved in, was becoming visible – coloured floodlighting. The bright, Living Faith colours looked wonderful against the walls of the church, and were particularly effective as it got darker and darker. 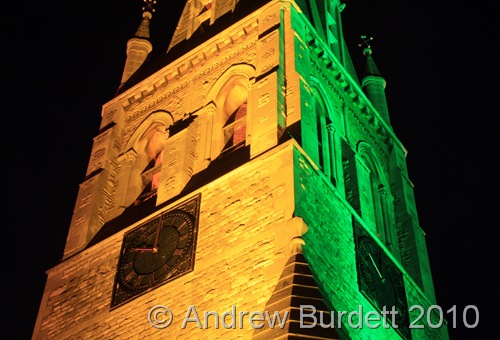 Over the next 24 hours, I put together the presentation in Apple Keynote, on my second-hand Apple Powerbook.

On Friday evening, a short service was held for anyone who’d been contributing to the project so far. Whilst there wasn’t a huge number of people, the service was really lovely, as we sat surrounded by bits of art in multiple stages of completion.

As we walked out of the church, a couple in their mid-thirties were walking down Norfolk Road. The lady was so engrossed in the splendour of the church in its bright new colours, that she didn’t look where she was going, and tripped over a kerb!

In his sitting room, over a drink, Richard and I finalised the music for the CD we’d play during the Sound and Light Show the following day. And then, Dad came and picked me up, and we drove home quite late.

Then, I worked through the night and into the early hours of the morning, cutting together videos of ‘the faces of St Luke’s’, and ‘Social Life at St Luke’s’. Finally, they were all ready, inserted into the Keynote file, and “good to go”. 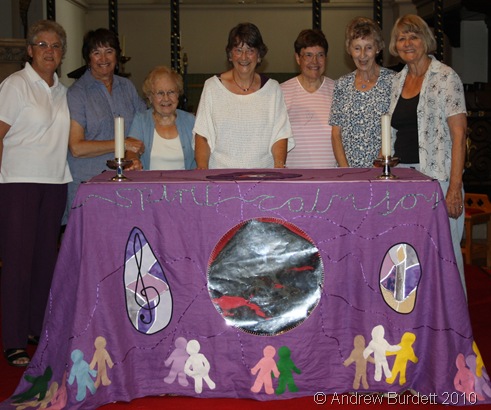 On Saturday morning, the last adjustments were made to the panels, before they were assembled into their triangular-based prisms, and installed around the dais’ new laid-flat alter cloth.

Dad and I arrived in the afternoon, set the equipment up, and did a run through of the show with Richard. Read more about the actual show, and the backstage preparations for it here.

This (Sunday) morning, the prisms remained, with the alter cloth now rightfully on the alter – where it belongs! A series of prayers regarding ‘Living Faith – Now in Colour’ were said, and in the sermon Richard summed up just some of the many highlights. Like last night’s post, I end with a quote from Richard Holroyd, the vicar, that he made at the end of his sermon this morning. Goodnight.

“There’ll be some people in this building, who’ll think about ‘what a waste of money’ the whole project will have been to a church which is already having financial issues. But – truth be told – this arts project has not been about some polystyrene sheets, a very purple alter cloth, and a flashy PowerPoint presentation. It’s about everything you can’t see here – the laughter, the fun, the smiles, the excitement, the paint on children’s hands and faces. It is through these things that we have demonstrated that we all, very much, have a living faith… now in colour.”