Tonight was the night that our church’s biennial summer arts project came to – what was intended to be – its climax.

The idea for tonight, originally, was to have a big hairy projector throwing images and text onto the high walls of the church. However, in planning meetings, it rapidly became apparent that this would technically be very demanding, and therefore almost impossible. With this ruled out, I looked for other ways of fulfilling Reverend Richard Holroyd’s ‘vision’. One of the next suggestions was to have several, small projection screens dotted around each corner of the church. The idea then would be that our guests could walk around the church, as they looked at different aspects of the overall presentation in different places.

Finally though, we settled for a large bed sheet, stretched over a wooden frame which would make up our screen.

After two and a half days (and a couple of very late nights) of general juicy creativeness, I had finally stitched together the Keynote presentation on my second-hand Apple Powerbook that I’d bought off eBay some time ago.

This afternoon, after Dorothy Stott’s 95th birthday party, Dad and I headed for church, to put the screen up and sort out my technical equipment.

There were a couple of real, genuine concerns. The first regarded the opacity of the sheet. Too many shadows were being cast on the ‘projection screen’ (big sheet) from the big iron screen behind it. Dad had a solution for this though – another sheet. Stretching this over the existing sheet meant it was twice as thick, and solved the shadow problem.

The other worry was whether it was going to be dark enough. The projector Dad had borrowed from work was unquestionably good… but would it be good enough. As there was nothing we could do about the sun, we just did a very quick run-through as best we could.

And then I was hungry so I went and bought some sweets. Then Dad wanted a cup of tea, so we went home. 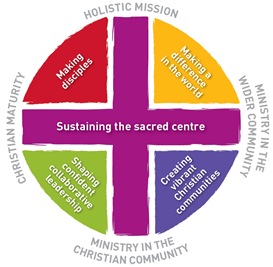 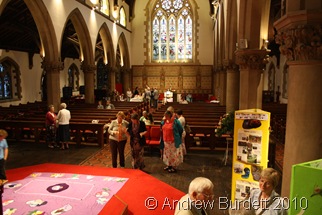 At 8:00pm, we returned with Mum, Harriet, and Matthew. There was already a good number of people gathering, which was a relief as, at one point, I was rather worried that only 10-15 people would be there. Before we started the ‘Sound and Light Show’, we invited our guests to go and take a wander around the triangular prisms that had been constructed. Each prism was a different colour, each colour was one of the four outer quarters of the Diocese’s circle. Then, like the circle, the middle ‘Sustaining the Sacred Centre’ band was represented by the alter cloth that had been lovingly sown together and made by ‘the ladies’.

As it was getting dark, at around 8:40pm, we encouraged guests to gradually make their way to seats in the pews, and sit back and enjoy the show.

It started with some Gregorian monk chanting, performed ‘off stage’ by Richard, Matthew Price, and my brother. Some recorded music took us through the history of St Luke’s, with the aid of antique paintings and photographs.

In the ‘Making a difference in the world’ section, we had a member of the congregation dressed up as a tramp. She walked slowly down the aisle, sat down at the front, and then Dad symbolically gave her a glass of water.

Matthew gave a very insightful talk into his recent trip to Taizé in France with St Luke’s.

There were a couple of videos of the ‘Faces of St Luke’s’ and ‘the Vibrant Church Community’ which featured highlights from the last few years of the social aspect of life at St Luke’s. We also showed a section of the BBC sitcom ‘Rev’, and a clipping from BBC News. 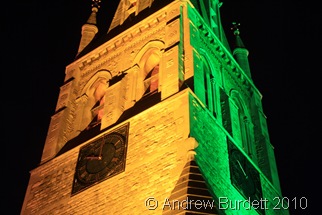 The end of the presentation showed a time-lapse clip of puffy clouds, waves crashing up on the shore, and then a lone candle burning on a black background. This faded to black, bringing a thought-provoking end to the show. I was pleased that people did ‘pause before applause’, and take a moment to stop and think about what they’d just seen.

Richard and I both realised that, despite all odds, the show had actually gone very well. Everything, just… worked. Neither of us could have expected it to have gone so smoothly. The projection was perfectly visible, the images all came on in the right order, and the CD worked fine as well.

There are some projects that I am all too glad to see the back of, though this is certainly not one of them. Despite being hard work, I have had so much fun making the presentation, and being a part of the development of the entire project, that it is a shame that it has finished. I end with a quote from Richard (the vicar), that he made as the equipment was being tidied away. Thank you for reading. Goodnight.

“That was wonderful. Now, what should we do next week, eh?”