I mentioned in some of my tweets on Twitter, that I’ve been producing a show about old people plotting to slip the Prime Minister up on a banana. You’ll notice from the embedded tweet below that we had somewhat of a dilemma with only 60 minutes to go…

“Doing a play in an hour about bananas, but the star forgot to buy any bananas. I had to race to Sainsburys…” 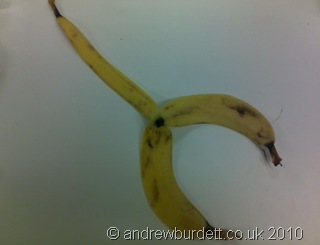 It’s a bit of fun, with – I believe – some really nice moments in it, many of which were devised by people far greater and cleverer than me. However, I co-ordinated the writing of the script, before deciding that lots of it was a bit rubbish, so I rewrote a large amount myself, and then went on to direct the 15-minute play.

Based around the idea to save the old people’s beloved Prime Minister by, ironically, slipping him up on a banana skin, The Prime Minister Goes Bananas (see what I did with the title?!) features several old people, the Prime Minister, and a couple of spies. One of the two spies thinks they’re the top dog, while my character, Wallace, is more of a hinder than a help.

It’s been really good fun doing this show, and by the audience’s reaction, they seemed to enjoy the finished product. Despite a few fluffed lines by a couple of the members of the cast, it was a play I am pleased to have been a part of making.