It’s Saturday, 19 June 2010, and today was the Cookham Village Fair, organised by the Cookham Scout Group. Regular readers will know I was selected in March to be part of the Berkshire Contingent, representing our county and country, at the World Scout Jamboree in Sweden in 2011. Read more about my efforts here.

Of course, three weeks abroad cost a lot of money (around £2.1K), so a large part of the fun of going to the Jambo is fundraising. As the seven Maidenhead and Cookham Scouts, we organised to attend each other’s group’s Summer Fairs, running a stall and trying to make as much money as possible.

As it was such a nice day, we set up several activities and stalls. One was a wheelbarrow assault course, where the participant had to take a wheelbarrow around the course in the shortest possible time. But there was a catch; in the wheelbarrow was 1 litre of water. A ten-second time penalty was added for every 100 millilitres lost, meaning the member of the public had to balance out the advantages of going really quickly but losing most of the water, against getting a slow time but with almost all of the water remaining. This was the art of this activity, keeping a steady stream of determined people.

In addition to a sweet shop, selling confectionary and sugary drinks, we also had a ‘guess the sweets in the jar’ stall. 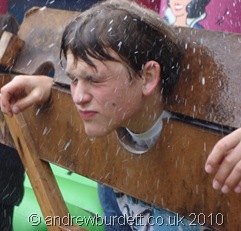 But by far the most popular amongst revellers, was the ‘Soak-a-Scout’ attraction. The name speaks for itself, but in case you were in any doubt as to the object of the game, you had to get the poor Scout in the stocks as wet as possible. Still, as the sun was out, it wasn’t all as bad as you may imagine! This picture shows me getting soaked, all in the name of fundraising of course.

We look forward to a similar exercise of raising cash tomorrow at Pinkney’s Green, as PG Scouts in Maidenhead play host to us Jamboreers.