Today the iPhone 4 was officially unveiled – I say ‘officially’ as Apple fans already knew what it was going to look like, thanks to an employee who left a prototype in a bar, which was then sold to tech-blog Gizmodo, and displayed to the public there. But, nevertheless, the latest addition to Apple’s line up of beautiful products was announced today.

“The quality of the materials, the manufacturing precision, the advanced technology… ultimately all of this becomes relevant when you just hold it in your hand.”

You may think, ‘but he would say that’, and you’d be right. But it is beautiful. Really, really stunning. And it incorporates all of the good things about the old iPhone, along with features we’ve been expecting since the announcement of OS 4.0 such as multi-tasking, and also some amazing features we could never have expected. 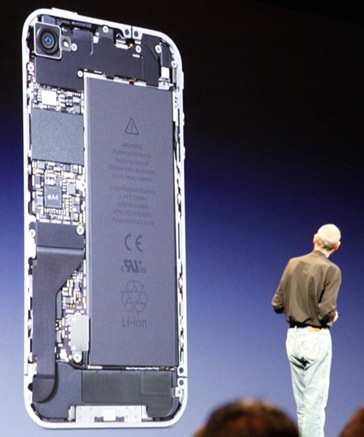 This iPhone promises to have a much longer battery life, thanks to a physically bigger battery, made room for by the tiny processing chip. We’re looking at 300 hours of battery life when left on standby. The casing now houses the Apple A4 chip – the same as we were introduced to with the iPad. If you look carefully in the picture above, you’ll just be able to see the chip marked ‘A4’ in the middle-left of the naked device. 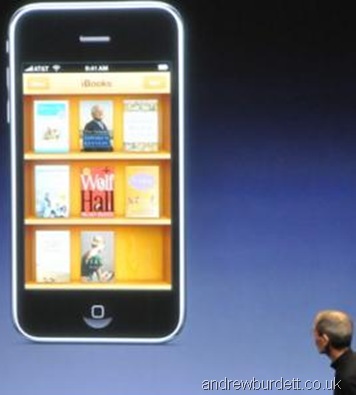 iBooks, the free application downloadable onto the iPad (a major selling point of the device) will now run on the iPhone. This is great for people who still love a bit of Winnie and Pooh, but are to embarrassed to hold the actual book in fear of people’s thoughts. Sadly, E-readers are threatening my chances of seeing someone reading a scroll on the tube in London…

The iPhone 3GS was the third incarnation of the iPhone to be released, yet it was the first with the ability to record and trim video. Well, the new iPhone 4 ups the game massively, with not only the ability to record HD video, but also edit it with the soon-to-be-released iMovie app, with Apple-designed effects and titles, as shown in this picture (left). 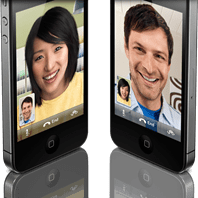 Another improvement to the photography experience is the front facing camera allowing communication similar to video calls to be made (to be called FaceTime). The photos released by Apple of this look amazing. However, it is important to note that this is only possible via Wi-fi, and relies on your contact having an iPhone 4 too. And finally, the main camera now features a long-awaited LED flash.

While I believe that some of the new iPhone’s features (such as multi-tasking, folders, and the retina display) are a great addition, some have left me a little baffled. No-one is ever going to read George Orwell’s 1984 on a 3.5” display. FaceTime (though it looks brilliant) has a limited market, as it requires Wi-Fi and an iPhone 4 at both ends. And, who’s going to need to record low-HD video when they’re out and about, with a tiny little lens? And nobody’s going to make a master video edit with a $4.99 app based losely around iMovie.

The thinnest Smartphone ever, aka the iPhone 4, is available to order from 24 June 2010.