Lembit Öpik: a name – you’d think – anyone would remember. But it seems his constituency didn’t on the 6 May 2010 (election day), when he lost the seat he had held since 1997, MP for Montgomeryshire in Wales.

Following much mocking on the special election-themed version of the popular satirical news programme ‘Have I Got News for You’, it would seem Öpik has now finally found himself a new job. 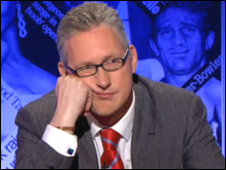 “Can we get on with it? I’ve actually got an appointment at the job centre in about half an hour…”

So, what is the new job for this politician? A public speaker? A writer? No. A stand-up comedian.

Needless to say, it is not the kind of job you’d expect the ordinary MP to go into following a fairly successful life in politics. But then this is not an ordinary MP. It’s Lembit Opik, a man who once claimed a £40 summons charge in his parliamentary expenses for non-payment of Council Tax. He wanted government money to find planet-destroying asteroids.

So perhaps it’s not too surprising that he does want to go into comedy. He is, after all, a very funny chap, though perhaps more ‘funny peculiar’ than ‘funny ha-ha’.#

Read more from the Beeb here.