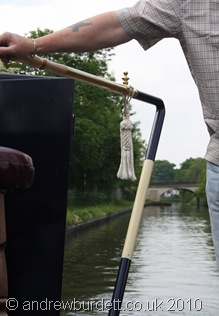 Last night, I was texting my friend Jake Smith, and asked him what he was up to today (Wednesday) what with it being the school Half Term holiday. He explained to me that he would be heading up to just outside Birmingham with his immediate family. Once there, they’d meet Jake’s uncle and aunt (his dad’s sister and brother-in-law), and hop aboard their canal boat for the day. He invited me along, ah so we arranged that he’d very kindly pick me up at 9:30am in the morning.

So, this morning broke, and I started getting ready for the day. But at 8:30am, I realised I did in fact have no shorts that fitted me, so Mum and I raced to M&S in town, ready for it to open. At 9:00am we were able to have a look, and eventually found three or four great pairs which will see me through this summer at least.

So, having purchased £130 of shorts and underwear, we drove back, and got my final things together.

Soon, he turned up on the doorstep, and we drove to the marina where the canal boat was waiting. Apparently the Smiths were earlier than usual, as they normally arrive a little late. But quickly the aunt and uncle arrived, and we were soon able to set off. 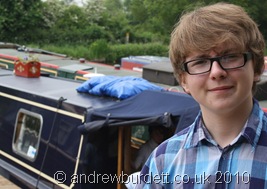 We each had a go at steering her; Millie first, followed by Jake, and then I had a go. We had to go slow as we passed the moored boats, as it wasn’t unlikely that they had people in them who’d be rocked by the waves made by the 50ft canal boat.

We stopped just after midday at a pub restaurant – a favourite of Jake’s relatives. It was a lovely place, though it was surprising that seating wasn’t available next to the canal itself.

I ordered a burger, which was DIVINE, and drunk through several Cokes during the meal. It was lovely, and it was great to chat with Jake’s family and ‘share gossip’!

After a delicious lunch, we got back onto the boat, turned it around, and headed back the way we’d just come. It was much sunnier as we returned, which was lovely. At 4:15ish, we started arriving back in the marina, and Jackey tied it up as her husband steered it into place.

We said our goodbyes, and then started making good progress on the way home. But then we got stuck in a big old traffic jam, caused by a multi-car pile-up. As we listened to the news, it was all pretty grim: the shootings in Cumbria, a murdered man, woman, and children… Oh, and parrots falling out of trees appearing to be drunk.