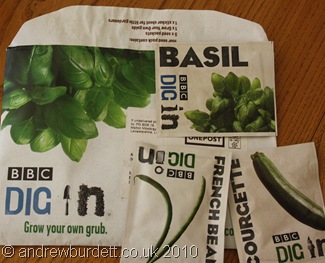 A couple of months ago, I discovered the BBC’s ‘Dig In’ campaign. The idea is to encourage people – who normally wouldn’t normally do any form of gardening – to get their hands dirty and grow ‘green fingers’.

So, I sent off for a packet of seeds, and a couple of days later, they arrived. I had some basil, some courgette, some French bean, salad, and carrot seeds. All I needed to do now was plant them.

A couple of months passed, and I forgot all about the seeds. But then I found them, and on the same weekend as Dad had spent much of out in the garden, I joined him and did a spot of gardening myself.

Having planted the seeds in seed-boxes, covered them in soil, given them a sprinkle of water, and then covering them in Clingfilm, it was just a matter of waiting for them to germinate.

I’ll update this blog as it happens!