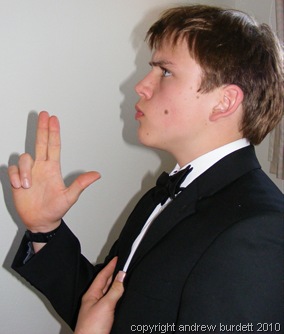 In ICT at the moment, we’re studying ‘movie editing’. Any one who knows me well will know that through my company (ABSstudios) I love making short films; often documentaries about trips, days out, or holidays, but occasionally other projects such as this year’s school Dance Show.

I’ve been using some of the very best kit, and recently purchased a Contour Design ShuttleXpress, to allow me to cut clips quicker, and increase the speed of my workflow. It came as a surprise, then, when we were told that all of us would have to use Windows Movie Maker for our editing. Don’t get me wrong, I like Windows Movie Maker. It’s a nice, simple tool, which I found adequate for my purposes until a couple of years ago. Eventually, we – as a class – encouraged the teachers to allow us to use Adobe® Premiere if we felt capable.

Another surprise was the ban of images in the storyboards we had to create to plan our clips. Eventually, we were able to overthrow this ban too, on the condition that we drew the images ourselves on paper.

Today, after several lessons of planning, we were allowed to head out with cameras. So, I gathered several of my friends and they danced and I filmed. Then I filmed the few members of staff who also agreed to dance!

The song I had chosen was Scouting For Girls’ hit ‘I Wish I Was James Bond’. My intention was to mix the shots from earlier in with shots of me miming the words of the song, and performing secret-agent style things (like using my smartphone, ‘hacking’ a computer, putting on a watch etc). I wanted to give it all a real James Bond feel though, so I wore a bow-tie, shirt, trousers, and jacket (as seen in the picture)! To add to the sense of spying, I also gave myself a black background with some mounting board and card, and then pulled down the blinds. After a couple of hours, the room was very warm and I was boiling, so I have the windows open now as I’m writing this to get some air in!

I am yet to edit it, as I want to film some more of my friends and fellow classmates dancing around the school site, but be sure I’ll upload it for your viewing pleasure onto the interweb when I’m done.