So here we are, at the end of a historic day in British Politics. From around 24 hours ago, bloggers and news-agencies were expecting a decision to be made by Nick Clegg and the Lib-Dems. Now finally it has, with the Tories and the Liberal Democrats forming a coalition government. And, David Cameron is – as expected – now the Prime Minister of Great Britain.

Yesterday, Gordon Brown made a semi-shock announcement that he will be resigning from the Labour Party as Leader. This led to the increased chance of an already likely Tory/Lib-Dem coalition. Then, at around 7:20pm this evening, Gordon Brown emerged from Number 10 with Sarah (his wife), and told the press that he is resigning as Prime Minister, and advising the Queen to invite Cameron to form a government. 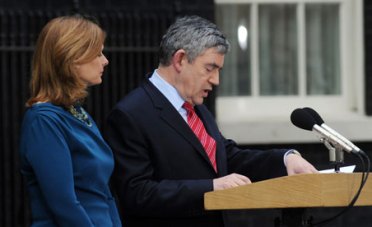 “I said I would do all that I could to ensure that a strong, stable, principle government was formed – able to challenge Britain’s economic and political challenges effectively.

My constitutional duty is to make sure that a government can be formed following last Thursday’s general election.

I have informed the Queen’s private secretary that it’s my intention to tender my resignation to the Queen. In the event that the Queen accepts, I shall advise her to invite the leader of the opposition to form a government. I wish the next prime minister well as he makes the important choices for the future.

My resignation as leader of the Labour party will take effect immediately. In this hour I want to thank all my colleagues, ministers, members of parliament. And I want to thank above all my staff who have been friends as well as brilliant servants of the country. Above all, I want to thank Sarah for her unwavering support, as well as her love, and for her own service to our country. I thank my sons John and Fraser for the love and joy they bring to our lives. And as I leave the second most important job I could ever hold, I cherish even more the first, as a husband and father. Thank you and goodbye.” 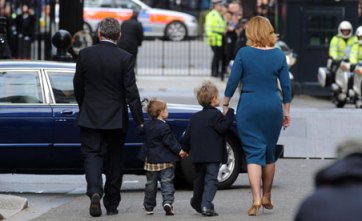 The last few sentences were particularly beautiful, but the whole speech is wonderful – accepting his own weakness, praising others for their strengths, and thanking the country as a whole:

“And, yes, I loved the job, not for its prestige, its title and its ceremony, which I do not love at all. No, I loved this job for its potential, to make this country I love fairer, more tolerant, more green, more democratic, more prosperous and more just – truly a greater Britain.” 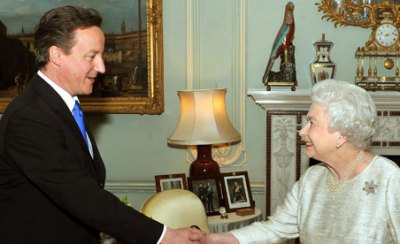 But his resignation allowed Cameron to roll up on the drive at Buckingham Palace (not by bicycle, however, it has been noted).

At 8:44pm, David Cameron and Sam Cam went into Buckingham Palace, to request / be invited to form a new government. Cameron confirmed Nick Clegg to be deputy Prime Minister, and says they are putting aside party interest and working together for National Interest.

Upon arriving on the steps of Number 10, David Cameron kissed his wife and made a speech which – quite nicely – thanked Brown for his services (as did Tony Blair in a statement, explaining his friendship of 30 years, his loyalty, and above all his dignity and courage in the last few days).

“Her Majesty the Queen has asked me to form a new government and I have accepted. Before I talk about that new government, let me say something about the one that has just passed. Compared to a decade ago, this country is is more open at home and more compassionate abroad and that is something we should all be grateful for. And on behalf of the whole country, I would like to pay tribute to the outgoing prime minister for his long record of dedicated public service.”

And so it came to pass, that on the evening of Tuesday, 11th May 2010, the Tories and the Liberal Democrats formed a coalition government with David Cameron as Prime Minister. Cameron must now move in quickly, stop making speeches, and make a wise choice when re-shuffling the Cabinet. And then, the real work starts, and the new Government must set about doing everything they promised in the last weeks and months. We are facing a whole new era in British politics. The next four years will be very interesting.

P.S. I’ve been using the BBC a lot recently, to digest the news in order to regurgitate it to you, dear blog-mates. For this however, I checked it against the Guardian’s live text updates.