What do we mean ‘Hitler’s War’?

In order to answer the question, we must first understand what we mean by ‘Hitler’s War’.

In this case, we’ll take it to mean a war which was caused and started by Hitler.

Certainly a lot of evidence would stack up towards something of that effect. He’d come to power in 1933, and within 6 years he was at war with most of Europe – the second time Germany had been involved in a war of this scale.

But is there more to it that that?

How did Hitler get to power?

The following are Hitler’s main policies:

The Nazi Party stood for the union of all Germans to make one big, great country. This was hardly surprising, as at the time, Britain still had a huge empire – something Hitler really desperately wanted.

Hitler wanted to cancel the Treaty of Versailles. This too was unsurprising, as Germany was not allowed to join, and hence had no say in how it was run, or what was being said.

Hitler also hoped to get Germany more land and food, making them the most powerful, fortunate race in the world. This would be something almost certain to get a German’s vote. 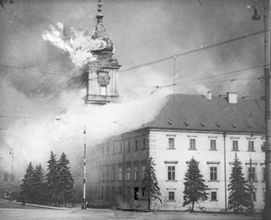 The Invasion of Poland in October 1939 is widely regarded as the trigger to start the Second World War.

The picture shows the Royal Castle in Warsaw on fire.

Did Hitler even want a war?

In his last days, Hitler wrote:

“It is not true that I wanted a war in 1939. It was brought about by those international statesmen working for Jewish interests. After my experiences of the First World War, I never wished for a second war against England.”

This is probably true. As a soldier in WWI, Hitler had a first hand experience of English fighting. And Hitler didn’t officially start the war either, Neville Chamberlain declared war on Germany on 1 September 1939.

So, in conclusion, was WWII Hitler’s War? I do not think Hitler was entirely to blame, but he certainly played a large part in both its causes and effects.

NB: I hope you have enjoyed reading this, and seeing my views on the subject. This work was done as History schoolwork on 29 April 2010.