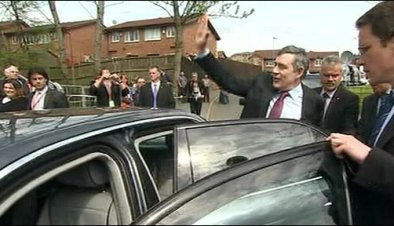 Today hasn’t been a good day for Mr Gordon Brown. After finally retreating to his awaiting car after a confrontation with the soon-to-be very famous Mrs Gillian Duffy of Rochdale, the current Prime Minister was caught uttering the following words:

“That was a disaster. They should never have put me with that woman. Whose idea was that? It was Sue’s I think. It was just ridiculous…She’s just a sort of bigoted woman, that said she used to be Labour.”

Despite being in what he believed to be the privacy of his own private car, he was still wearing a broadcast, radio microphone. These are the wireless mics that are used right across the industry. They feed back to receivers, monitored by soundmen, and then plugged into the side of a camera. This means that the sound and pictures stay together.

There’s a general agreement that, should the speaker be doing something (like using a lavatory) or saying something irrelevant, the broadcasters won’t put it out. However, it would seem that this particular sound-byte had been leaked by Sky.

As Britain learnt of Gordon’s big mistake, he realised he must go and apologise to Mrs Duffy.

It’s easy to empathise with Brown, even if you don’t sympathise. He’d had a long, hard day, answering tough questions. The biggest thing he wanted to do was let it out. And so that’s what he did. In a car. Soon to be heard by the nation.

If you look on the web, you’ll find stats on how this has affected how people will vote. 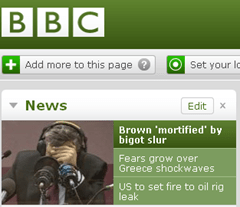 You can watch the clip yourself here.