The latest election debate, (the second of three, which which was broadcast on Thursday, and hosted by Sky), focused on international affairs. However, if one 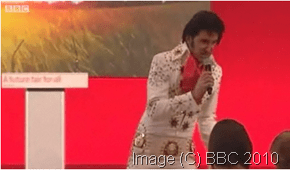 found it a little tedious, the Labour Party have come up with a novel way to grab your attention. It was meant to be a rally for a seat in Northamptonshire. But following Mr Brown’s speech full of many-a-pun in front of mainly Labour supporters, he handed over to a man in a silly Elvis Presley costume, who started to sing some of the rock ’n’ roll star’s hits.

“When I was driving down here this morning, I was listening to 5 Live, and they read out a Tweet from Alistair Campbell, that said somebody bigger than Gary Barlow would be here today…”

You know when a man is losing hope at winning an election when he brings out an Elvis impersonator. What was even worse, and with a huge sense of irony, is that the song the man sang was ‘A Little Less Conversation’’. This was directly after a very long and boring speech with a few whiffs of banter (though as far as political banter goes, it was pretty dull), made by the Prime Minister.

Watch the video on the Beeb.