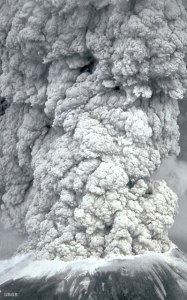 Get the latest: here

I woke up this morning to be told about how the Icelandic Volcano is affecting us here in the UK. Yesterday, the volcano on the Eyjafjallajoekull Glacier erupted again, the second time in three weeks. It sent huge ash clouds into the air, and the 200-metre-deep glacier started to melt. This water, which is flowing unstoppably into the rivers, has made waters rise by 3 metres.

Until the 20 March, the first eruption, the volcano had been dormant since 1821.

But with hundreds having been evacuated, it isn’t just affecting Iceland. Over here in Britain, many airports are being closed because of the thick volcanic ash clouds coming over here. Apparently, not only does it obviously cause low visibility, but it can seriously damage aircrafts’ engines.

While Scotland have already shut all of their airports, BAA (the British Airport Authority) has announced that from midday, all flights from the Big Three (Heathrow, Gatwick, and Stanstead) would be suspended. Nothing will be allowed in British Airspace from 12 noon until 6pm this evening.

Despite the clear disruption and danger, one can’t help thinking how comparable it is to something out of Doctor Who…