All this week and last week are the school Easter holidays. Regular readers will remember that I met up with my very close school friend, Jake Smith, at Legoland last Friday. Well, today, he returned the favour, and kindly invited me to go to the Science Museum in London. It wasn’t just us two though; but his sister, mum, mum’s colleague, and colleague’s daughter. 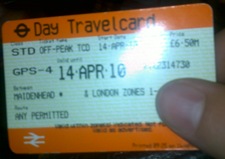 We got on the train at Maidenhead, and then we were on our way to Paddington. From there, we got the tube to South Kensington. However, whilst underground, a rather elderly gentlemen started talking to me about the fact that he was going to the Science Museum also, to meet his wife who was already there. He used to live in London, as he explained, but has now moved away, and only goes to the museums when there is a special exhibition. He later went on to talk about his poem, which was published in a book on Amazon.

In all the excitement I – who had been delegated the task of telling the others when to get on and off – had lost track of our destination, amidst the conversation. As a result; me, Jake, his party, and the man, had all gone too far, so we got off at Earl’s Court, and looked for a train to go back. At this point, we separated with the man, as he went another way.

Soon, we were back on track, and we headed into the museum. After a bit of another disaster at the cafe, involving carbon-water drinks lacking flavour, and a scone which fell completely to pieces (not to mention the hard cream, and odd-tasting jam), Jake and I separated, to look around the museum ourselves.

We had a good morning, and then went to the IMAX 3D cinema to watch a film about the ocean. That was amazing, though the whole experience is a little tiring on the eyes, and I found myself falling asleep at one point.

We then looked around some more exhibits upstairs, in the more adult section, before getting totally bored and leaving the building. Knowing Harrod’s was just around the corner, I texted Jake’s mum to tell her that we would head there. 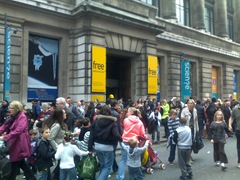 I received a call just a minute later asking where we were. Realising she hadn’t read the text, I told her we were downstairs. Then, I turn around and realise everyone is leaving the building. I don’t think our story had washed, but we told her to meet outside on the grass. It turned out that it was an evacuation test, to see if they could get everyone out of the building in time. But, as they’d seen everything they wanted to see, we did go to Harrod’s, as a group. 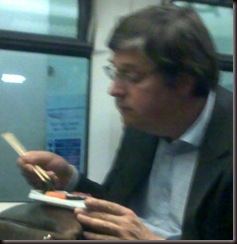 I bought a new video adapter cable, and then, after a snack tea at McDonalds’, we started heading home by train.  Oh, and I saw a man eating Sushi on the direct train from Paddington to Maidenhead.

It was a thoroughly enjoyable day, thanks to Jake for inviting me, and Lisa for organising it!