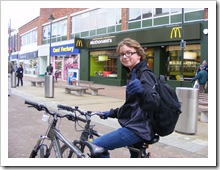 So today was the day. Today, we would be cycling to Lee-on-Solent, then to Gosport. From there, we got the ferry to Portsmouth. We were in Portsmouth for just a few minutes, before getting the WightLink ferry to Fishbourne on the island.

It was then a gruelling ride, but with  wonderful vistas, through the countryside of the Isle Of Wight. It was extremely hilly, but what goes up must come down, and eventually we were rewarded with exciting downhill sections. 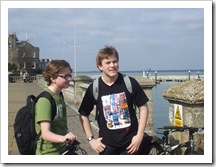 At one point, we got caught in a huge marshland, but thinking it was the only way through, we pressed on, being covered in mud. It was when we got back onto the road when we realised we had just done a big circle.

After crossing the East Cowes to Cowes stretch by another ferry we eventually decided on a spot for lunch. I had a burger and chips, Jake had the same, and Andy had a soup of the day. 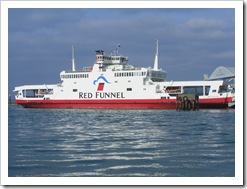 We raced through East Cowes, but as we stopped, it set off. We knew that we would have to wait an hour until the next one, and it would be another hour and a half until that arrived in Southampton.

We passed the time on the shore, and cycling  up and down the promenade.

But finally Andy saw it on the horizon, and we made our way to the port. I logged onto the Ferry’s Wi-Fi network, and updated this blog and the Twitter on board. 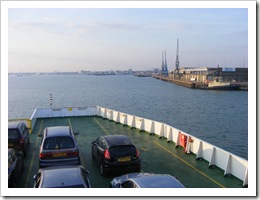 However, because at this time of year all ferries across the River Hamble stop at 4:00pm, clearly we would have to cycle around the entire bay. It was at this point that we all looked out to sea, and realised what a daunting challenge lay ahead of us.

So, as the ferry came to a stop at Southampton, and with the sun setting, we started the last leg of this epic journey. We went ‘cross country’ for most of it, so Andy (who had no bike lights) sandwiched between Jake and I who did have lights.

There were some pretty dangerous sections, and with the small illumination that my bike was providing, there was little sign of what was to come on the road. 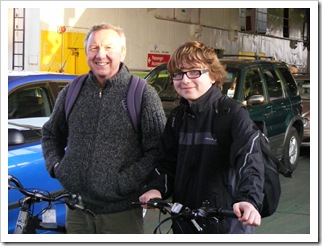 But we kept going until we arrived at a pub, which was familiar with the Smiths from previous breaks. Andy called in, asking to reserve a table, though they said they weren’t busy so we should just be able to arrive for dinner and be served.

So we completed the ride that had taken us so far (we worked out about 45-50 miles excluding the 5 ferries) and rolled up on the dark driveway of the bungalow. As Jake showered, I moved the bikes into the garden, before washing myself.

When all three of us were feeling clean and fresher, we walked (all quite stiff) to the pub we had called in at earlier.

By now it was 8:30pm ish, and the restauraunt was quiet, but I had a beef lasange, while Jake enjoyed another burger, and Andy had another dish. After a small dessert, we started walking back, and Andy called in at the shop to buy something.

When I got back to the bungalow, I was ready to go to bed, but updated the blog/diary thing, before finally turning the light off at 11:00pm.