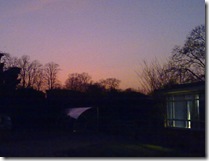 I am really sorry for the lack of blogs through the entire of this week. But, instead, I’ve decided to give a round up of the last week.

From Monday to Friday, I’ve been having rehearsals for the school musical every lunchtime and after school most nights. In fact, on Friday, the set which we are hiring in arrived. It took several members of the sixth form and the caretakers to get it all in, but after around 20 minutes, it was fully offloaded. This also meant that we could try our costumes for the first time. I look pretty ridiculous in mine, but hey! That’s musical theatre for you!

On Tuesday, the sky looked like it was bleeding. I say this because the bottom of the sky on the horizon was a ruby red. By the time I took this photo, it wasn’t as impressive, but it gives the idea.

On Friday, we took my grandfather to see the Moscow State Circus at Wycombe Swan theatre. Whilst he really enjoyed it (which was his Christmas present from Mum), Harriet and I loved the fact that we were watching it for free, because we are students under the Metro’s ‘A Night Less Ordinary’. 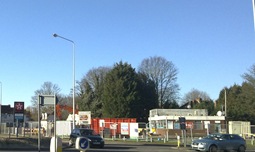 I was slightly concerned to see on Saturday morning that a Texaco garage had disappeared during one week. When driving past, all that remained was a digger and the shop. It’s a bad picture, but again, it gives an idea.

On Saturday night, my mum, dad, and I went out to a favourite local Chinese restaurant. After a lovely meal, they gave us all a Chinese fortune cookie with the bill. Instead of the standard, zany, way-off message, my fortune slip read “Help! I’m locked in a fortune cookie factory”.  This was odd, but quite funny! 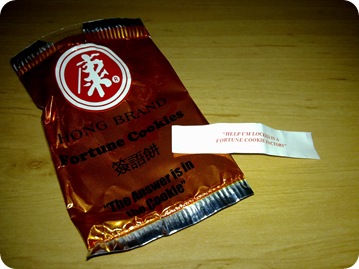 I look forward to a very busy week of choc-a-bloc musical rehearsals.

Anyway, have a nice week.